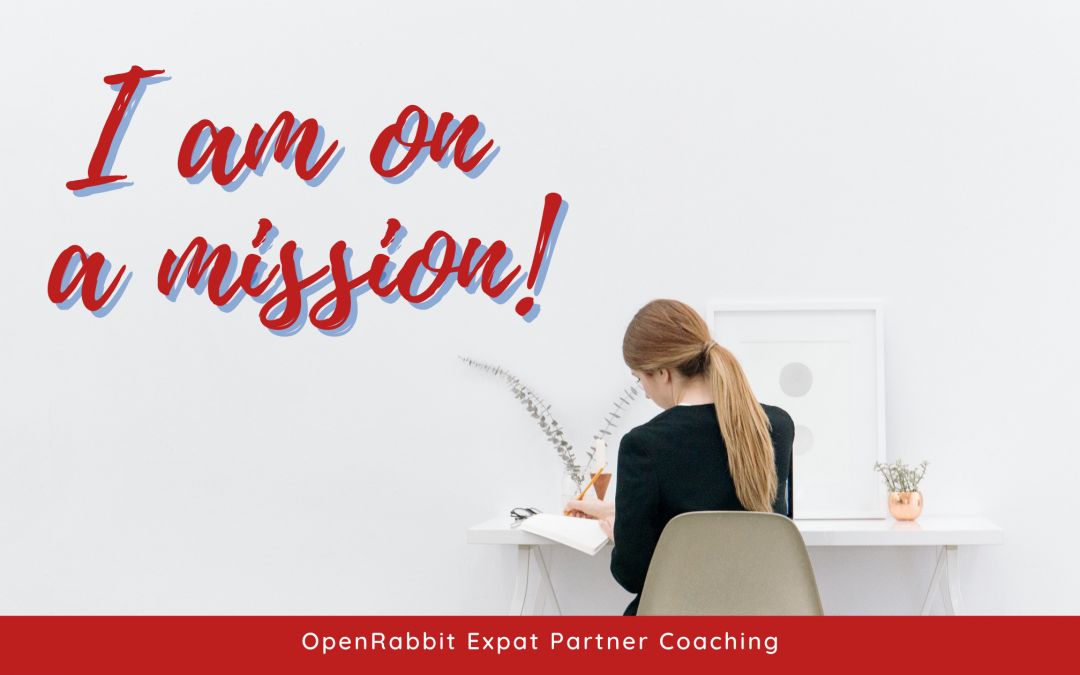 My life’s mission is to take away barriers and offer support so that women can develop themselves, follow their ambitions and create the lives for themselves that they aspire to.

I am currently working with expat partners, usually women, who give up their jobs to accompany their husbands abroad and support their careers. I help these expat partners find meaningful and fulfilling ways of using their professional skills and experiences, be it in paid work or otherwise.

In this work I encounter heart-breaking situations where the lack of attention for the expat partner’s needs are part of the expatriate culture and freeing themselves from that situation is a struggle. It’s unconscious and it is hidden. The expat, the partner themselves and the expat environment assume that this is the way it is supposed to be. This is the expat culture and, as it is generally quite a privileged environment, few people feel the need to come to the rescue.

But I am on a mission. I don’t want expat partners to suffer a loss of professional identity and revert to a life of serving their husband and children, unless they consciously choose to do so and find it fulfilling in itself.

My mother, my role model

Throughout my life I have been drawn to situations where women are held back by structures and cultures that are followed unconsciously.

It wasn’t something that my parents talked about when we were young. They were quite traditional in the sense that my mother was in charge of the house and the upbringing of their five children and my father’s responsibility were the bins, the repairs in and around the house and the garden.

However, my mother wasn’t only a housewife. She was a child psychologist and ran her own private practice. She worked part time and managed to do that for the most part during school hours. She was one of the few mothers at school who worked and I was proud of that.

She would never pass any judgement on mothers who didn’t work but she was clearly expecting her daughters to do well, go to university and have a profession. There was never any difference in how my brothers, sisters and I were treated with regards to academics. It was all done in an unconfrontational way. She wasn’t a ‘soap box’ kind of person; she wouldn’t participate in women’s rights discussions. It was just an undisputed assumption that we, as girls, were going to use our talents and follow our ambitions.

My mother as a role model, and her expectation that I would get a degree and develop a career, must have been at the core of my lifelong mission to remove barriers and support women.

Finding my own path

In my first job at ING bank, I joined the women’s network when I was in my late twenties. I had only just started my career in Human Resources management and was not yet very aware of the problems that my more senior female colleagues were encountering but I instinctively felt that I had to be part of the movement. It was early days for equality in the workplace in the 1990s in the Netherlands. Senior leaders were willing to listen and openly supported the movement, but they were not quite sure of what needed doing. I think we were all still trying to work out what the dynamics were. The term ‘unconscious bias’ hadn’t yet found its way into the workplace.

As I worked in HR, I had ample opportunity to talk to male managers and leaders about the position of women. Like my mother, I wasn’t on my soap box, but I challenged the things they said and opinions they expressed.

I remember my conversation with one manager in his mid-forties. He came from a privileged background and lived the upper-middle-class life. One day I asked him what his wife did and he responded with a condescending smile on his face, “My wife was a ‘little’ secretary when we met and she stopped working when we married”. I could have slapped him in the face! It is true, she might have been perfectly happy with her life choices but the way he talked about her felt so disrespectful.

I have always had problems with seeing women being passed over for promotions and being written off as soon as they had children. I challenged a manager once about a woman who returned from maternity leave and started working part time, three days a week. She was taken out of her previous role and was given bits and pieces to do that nobody else wanted. She complained and the managers didn’t understand. They thought she should be happy that they had graciously offered her a part-time position. Who was she to complain?

Fortunately, we have come a long way since the nineties but that doesn’t mean that things like this don’t happen anymore.  There are still barriers and challenges and they keep appearing.

When I moved to Taiwan I encountered completely different dilemmas with regard to women and working mothers. I was happy to see that Taiwanese mothers continued working after childbirth and that there didn’t seem to be much impact on their role in the organisation. For them, the challenges lay at home.

My assistant was very young, aged 19, and she had a one-year-old. She worked full time and I often asked her about her daughter. She and her husband lived with his mother and that was childcare taken care of. However, it was common in Taiwanese culture that the mothers-in-law didn’t just look after the child while the parents were working, they completely took over. My assistant had no say over the upbringing of her daughter which made her very sad.

My mission to support women was triggered but this was not an easy one. It was engrained in Taiwanese culture and it happened at home rather than at work. The only support I could offer was to be there for my assistant when she was struggling.

When we moved to Japan I entered a completely different situation. The way women are treated in Japanese business culture is appalling, still in today’s world. Prompted by the dire situation I observed, I started familiarising myself more with the latest literature around women in business. Multinationals and global professional firms were working hard in the Western world to have the discussions, build awareness and put policies in place to address unconscious bias and support women’s careers. Not yet so in Japan.

I joined a very international wing of PwC. The leadership was almost completely foreign but the administration was Japanese. I was hired as their first HR manager and there was a lot to do. The intake of new associates had a nice gender balance but from manager level upwards women seemed to be disappearing. That was my first mission and by building awareness and talking about the benefits of diversity of management we slowly grew a better gender balance at manager, and eventually at director level.

The second mission was pregnant women. It was common practice to phase women out once they were pregnant. Of course, I had to challenge this. Did they seriously want to hire and train female associates for about five years to then just drop them? What a waste of investment and how unfair to the women! Again, it was a matter of awareness. So many of these things happened unconsciously and with awareness came change.

The local PwC firm, almost 99% Japanese, had been called upon by the global board to work on their gender equality. Why were there so few female partners and directors?  The one female partner they had and who was in charge of HR (this is a common feature because women are considered to be better at dealing with people stuff), was put in charge of improving gender equality and I contacted her to offer my help.

I was on my mission again, this time building awareness and educating a completely Japanese board around the benefits of diversity and gender equality. I had a clean slate and could put my life’s mission to work. I talked to many men and women in senior and junior positions and there were several occasions where I wanted to slap a Japanese male in the face. The things some men dared to say about women were shocking. But there were enough leaders at senior levels that were willing to listen and I am proud to say that I was there at the start of the journey, albeit a very slow one, towards gender equality in Japan.

When I moved to the UK in 2012, I decided to continue in the Diversity and Inclusion field. I had assumed that Western countries were far ahead of Japan, and they were, but not as far as I had expected. It was clearly a matter of going for the long haul and repeating the same message over and over again. I soon got bored with it and started looking elsewhere where I could make more of a difference to individuals.

And that is where I am now.

In my 23 years of living abroad I have come across many intelligent and highly educated expat partners who are housewives and are keeping themselves busy with activities at the international schools and women’s clubs. Some enjoy it, others do it to fill their time and secretly suffer from a loss of professional identity. It is this latter group of women that I focus my work on.

I want expatriates to be more aware of the psychological damage an intelligent, educated woman can experience when her professional identity is taken away from her. I want the expatriate partners to know that she doesn’t have to settle for the standard expat culture and be a stay-at-home wife and mother who keeps herself busy with unfulfilling activities. I want her to know that there are things that she can do. With courage, creativity, flexibility and persistence she can find her professional fulfilment. And we don’t need to doubt that she has enough of those traits. She has proven this over and over again when she picked up her family and settled them in yet another country.

However, this doesn’t mean she needs to go through this all by herself and that is where I come in. Through 1:1 coaching and group coaching I work with expat women to help them find their way to professional fulfilment. To see women find the confidence to change their lives around is a wonderful thing. It is rewarding and very fulfilling. But there is more work to be done. I want to see more success stories. I am on a mission!